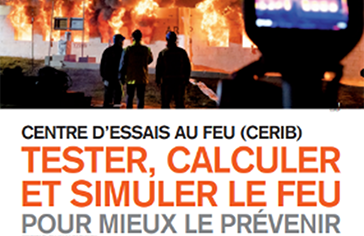 In the report "Tester, calculer et simuler le feu pour mieux prévenir" (Test, Calculate and Simulate Fire for Better Prevention) published in trade press magazine Travaux No. 977, Christophe Tessier, the Manager of the Fire Testing Centre, presented the background to the laboratory, its organization, its resources, and its many projects in France and abroad.

He explains how the Fire Testing Centre has been involved in projects such as the new road-deck slab of Mont Blanc tunnel, the Grand Paris Express rapid-transport link, and the HS2 (High Speed 2) rail line between London and Birmingham, to which it contributed its expertise in fire-resistance testing.

In the report, Christophe Tessier presents the four main services of the Fire Testing Centre: Fire testing, In situ testing to check calculations against real life, Fire Safety Engineering, and Research & Development. For every one of them, he refers to the many projects on which the Centre has worked, not just in France but also in the UK, Canada, and the United States, and he stresses a real desire for greater international development.

The report, which is only available to subscribers, was published in an issue devoted to Underground Works. The Manager of the Centre explains the special factors involved in underground fire testing: “When observing the fire performance of concrete structures in underground works, tests pay special attention to extreme fire conditions such as can be encountered in road tunnels, for example, using severe fire curves like HCM (modified hydrocarbon) and RWS (RijksWaterStaat)”.

As examples he gives the Mont Blanc tunnel and the Grand Paris Express tunnel for which “fire tests were a key point, the final step for giving the go-ahead for casting concrete elements”.

For more information on issue No. 977 of Travaux magazine, click here.

This site uses a Google Analytics tracker that allows us to understand how our website is used. It collects various information such as the most viewed pages, the time spent on the site or the origin of the traffic. We use this data to improve our site and provide a better user experience. You can accept or reject this tracer. Accept Reject Cookie settings More information
Manage your consent

This website uses cookies to improve your experience while you navigate through the website. Out of these, the cookies that are categorized as necessary are stored on your browser as they are essential for the working of basic functionalities of the website. We also use third-party cookies that help us analyze and understand how you use this website. These cookies will be stored in your browser only with your consent. You also have the option to opt-out of these cookies. But opting out of some of these cookies may affect your browsing experience.
SAVE & ACCEPT
Go to Top